After 2 years of fears, assumptions and excuses of all sorts, I have finally attended a 10-day Vipassana Meditation course.

What is Vipassana? I will simply use a recent life situation to explain.

A month ago I was about to leave the island of Malta, where I spent a beautiful year and a half. A badminton teammate gave me a stuffed donkey as a goodbye present. It was very unexpected. I started jumping up and down, making squeaky sounds of happiness. He was looking at me, quite perplexed.

‘I never expected a gift from you! It’s a sweet, fluffy donkey! Thank you so much (hugs and ear-piercing sounds again) Which means… I made an impact on your life!’

‘No, don’t say that. You bought me a present because I meant something to you, I’ve made some kind of impression on you….!!!!’

‘Haha, I don’t understand. I just bought you a donkey. It is just a donkey.’

I ended up being disappointed – so the donkey is just a donkey that does not mean anything?

This is Vipassana. Seeing things as they are. Not as you would like them to be.

It is an ancient meditation technique, which originated from India. The idea behind it is to observe the sensations within the framework of your own body and not react to them with craving (if the sensation is pleasant: subtle vibration), or aversion (if it hurts, itches, pulses etc.) The whole ideology of Buddha is based on the premise that you should only believe in what you experience, this becomes your own, tested reality.

Anapana is the so-called kindergarden of Vipassana. It is simply focusing on your own breathing, as it is. Natural breath is always with us, daily. No special arrangement is needed to practise Anapana. It is not a breathing technique (like Pranayama). The first 3 days we were observing our normal breath, as it is. Buddha chose the area below the nostrils, above the upper lip, for the sake of concentration. The smaller the area our attention is concentrated on, the more sensations we could feel, as the mind becomes sharper. By the third day I could feel the very touch of my breath, as I exhaled.

From Anapana to Vipassana

On the fourth day of the course we were introduced to Adhitthana sitting (meaning strong determination): Not changing our position or opening our eyes for an hour.

We were asked to do this three times per day, an hour each.

We had to observe objectively every sensation that cropped up from head to feet and vice versa- and not react to it.

I have never felt such gross pain or itching. It was extremely difficult to remain equanimous and analyse different unpleasant sensations without ‘argh-ing’ or ‘phew-ing’ when they are over. Equally, it was curious to explore the mind pattern of craving and clinging to pleasant sensations, thus becoming irritated in their absence.

At the beginning of the course we were asked to undertake the following 5 precepts:

Abstain from all intoxicants

The above were very easy to keep, provided food was served, men and women were segregated, and there was a 10-day noble silence, so we could not tell any lies. 🙂

The only occasion on which I found it hard not to break two of the precepts was on the eighth day. It was during the last meditation for the day when I felt an awfully strong itching sensation on the top of my head. But I remained calm, tried to observe it, determined the areas where itching was stronger. Interestingly enough the centre of the itching was constantly moving. I had to open my eyes when I felt the itching sensation literally fell off my head.

It was an earwig. Happily marching its way on my meditation blanket, taking full advantage of my peace and harmony. I could not scream or talk. I could not kill it either. So I just gently removed it off my blanket and directed it to the fellow meditators. The one next to me has just opened her eyes as well. She was terrified but did not utter a word as well. We were both engrossed in the earwig’s movements. After a few minutes the earwig moved to the very front line and got under the blanket of another fellow meditator. Then we could both rest and sigh: Vipassana works – everything is impermanent 🙂

The course is not a vacation. Not even close to a prison either. It is very hard work: work in isolation, without consolation and requiring systematic effort every day, every hour. No communication for 10 days with any of the other meditators, no smiling, no reading or writing, only hard work with one’s determination, discipline, past, future, sensations, miseries, joys etc.

It is extremely important to follow the rules from the Code of Discipline. But it was equally important for me to smile, without breaking the rules: 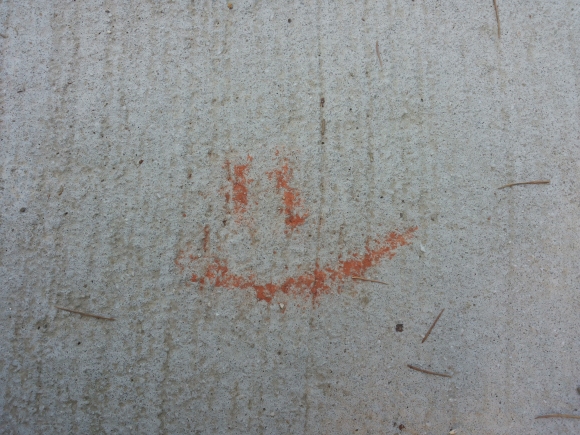 5 thoughts on “The bare reality”