It is sad how important the opinion of the others seems to be. Regardless of what we think about the way we look, talk or dance – the others have the final say. The others are the invisible jury at all times.

How many times have you made the same joke that had fallen flat 2 times before that? Have you worn the dress they think makes you ‘a little bit’ fat? Do you feel uneasy when you want to quote something wise but can foresee the stream of judgment swiping you away? The others always find a way to control our lives, because they are more than just I. Millions of jury members and only one I. We have become people made of other peoples’ eyes – the way they see us – defines us. But all of a sudden: a doubt, an insight springs to mind: What if they are all wrong? What if it does not matter what they think of me?

Inspired by a beautiful morning in Bologna, I took my writing pad and went out. I saw a sunny bench, sat down and started writing. Shortly after, a man approached me, stammering: ‘Mmmmay I draw you?’

‘Me?’, I responded glowingly.

‘Yes, you.’, he confirmed (thankfully)

He sat next to me and started preparing. I carried on writing but was not even 1% into it. I was intrigued, I thought “I am somebody’s muse. I wonder how he sees me.” The man fished in his scruffy bag for some time. He took out a regular, lined pad. Nothing like a professional drawing paper.

“Maybe he is a fan of cubism or something. Or maybe it is a new art movement. Ok, wonderful, no need to worry – I am still his muse.”

I write shit. All my attention is engrossed in the outcome of the man’s painting. How do I look according to him? I fought the temptation to peak. Only with one eye. Only half an eye. Just a blink?

After five minutes of inhumane effort to defeat curiousity – that’s it.

And this is how I look like according to one of them. 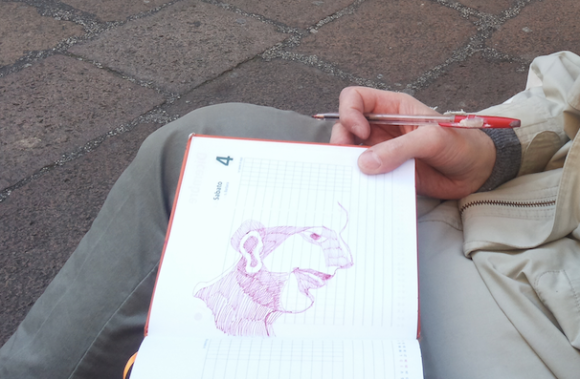 In this very moment I did hope art is subjective.

After attending Vipassana, it became crystal clear that attention should not be sought from the others, from outside. It is something we are all so attached to and thus when it is not there, for one reason or another, its lack causes suffering and misery.

The others would always be there, sometimes commending us, sometimes scolding us. Ultimately, it is not their fault we cannot accept criticism, or cannot live happily without their praise.

“There is no good or bad, only thinking makes it so”.

2 thoughts on “The invisible jury”